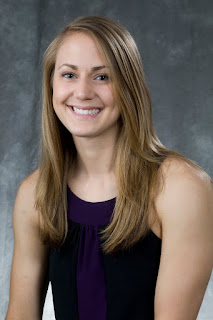 We are just about one week away from reporting day and the calendar turns to August. The reality of things is that there will be college volleyball played this month. The club is only a few weeks away from squaring off against a very good Baylor team that bounced around the end of Top 25 lists last year.

This weekend we continue interviews with the veterans and today's virtual sit down is with Junior utility player Melissa Miksch. I know "utility player" is more of a baseball term, but Mel is an excellent passer who gets a lot of time on the back row and is someone who is often brought in to serve before starting her way across the back. Mix that in with the occasional swing from the left side and you've got my definition - at least for this post.

Last time, I commented on Lo's academic accomplishments. Those comments were made by reputation but trivia for the day will be that Mel is the only current Ladyjack that I have taught while doing my "other" job here at SFA. She may be the last one for a while unless we get a math major recruit in years to come as I am teaching less and less in core curriculum courses. I can tell you first hand that Mel is an outstanding student - easily one of the best I had in an introductory statistics class that is fairly well-known to be headache causing.

She took a break from her last few weeks of summer freedom to respond to my questions. A transcript of our Facebook interview follows:

SFAVolleyBlog.net: Your bio on the athletic website says that you were an all-district setter in high school. Have you always been the type of player that has concentrated on being versatile, sort of a “utility” type player, rather than locking in as a primary left-side hitter or L2 or some other label?

Melissa: Throughout club ball, high school, and now at SFA, I have been a versatile, so called “utility” player. My coaches knew I could play almost every position if they asked me to and I was willing to play them too. When I first started volleyball I began as a setter, but eventually I would always end up playing another position. Jason, (my high school coach) always told me he just needed me out there on the court, especially in a setting role. We ran a 6-2 for most of my high school career, and I enjoyed hitting and setting all the way around. As a utility player, though, you have to be ready at any point to go in the game (sometimes you go in cold) and do your job, which can be challenging. But, overall I do like to be a versatile player, because I love being able to step onto the court in any position and help my teammates win the game.

SFAVolleyBlog.net: Last year, you were second on the club in digs and digs per set. Do you consider your back row defense and ball control the best part of your game at this point? Is that something you specifically were concentrating on this time last year? 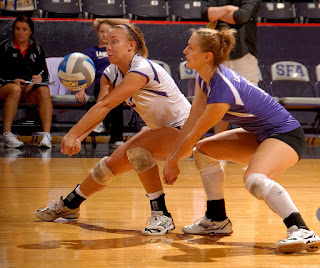 Melissa: I do consider my back row defense and ball control the best part of my game at this point. At this time last year I was concentrating on that as well as every other position I could have possibly been asked to play. Whatever position coach needed me in I was willing to play, and to do my absolute best at it.

SFAVolleyBlog.net: Last year at this time, your name came up a lot when I asked coaches about players most improved from 2008 going into 2009. What is the #1 thing you want to improve on during 2010?

Melissa: My #1 thing I want to improve on during the 2010 season is my consistency. I know I have the potential to play almost every position out on the court, so it is my responsibility to show up every game, mentally prepared to perform the best I possibly can.

SFAVolleyBlog.net: Coaches and your fellow players often brag on you for your strong conditioning. Is there a specific routine you go through during the off-season to stay in prime shape in preparation for an upcoming season?

Melissa: I don’t think that I can go longer than probably three days without some kind of physical activity. You will rarely see me sit in front of the TV all day long. During the summer I always try to keep up with the workout packet we are assigned to. I sometimes run at the park or do approach jumps in my back yard. My sister (who lives in Dallas) played volleyball in college as well, and whenever she comes down to visit we always work out together. I eat pretty healthy and consume little junk food. In my head I also know that if I take a long break without doing any physical activity, then it will be even harder for me to get back into shape. Just as a side note: When I was 5 years old I had six-pack abs and toned arms. People would ask my mom what kind of work out she would make me do. But, of course, I never worked out at this age…I guess it is in my genes.

SFAVolleyBlog.net: At what point in your career did you learn your jump serve? How long did you use it in practice or work on it until you were confident to use it in matches? Was there anyone specific that taught it to you, or did you just pick it up on your own?

Melissa: As long as I can remember I have always practiced jump serving by myself. But, it was not until my 16’s year in club that my jump serve became effective in games. Ted, (my coach at the time) taught me a lot about how to improve every aspect of my jump serve, including my toss. Along with his good advice, I always remember he would tell me to just “hit the crap outta the ball” when I serve, and that’s exactly what I did. I presume it worked.

SFAVolleyBlog.net: Finally, I mentioned above the fact that I have first-hand knowledge that you are a strong student. You still have a couple of years to be here at SFA. But when graduation comes and SFA playing days are done, what do you see yourself doing post-graduation?

We've still got the last piece in our Southland coaches series to get to your eyes and I've got a few other plans in the works. Illness around my house and deadlines with my real job kept me from posting twice this week. Next week, we should be back on track. Look for two posts this coming week with the second one being....