Time to continue previewing each of the veterans as they squeeze whatever free time they have left out of their summer before reporting date hits in just a few weeks. Today's "interview" is birthday girl Laurel Kuepker. I know I've written this here before, but the first memory I have of Laurel was when she came for her recruiting visit. Both Debbie Humphreys and the assistant coaches pointed her out to me before a match and my first thought was "Is she even a teenager?" She looked so young. To be honest - and despite the birthday - Lo still looks really young to me. She's been legal for a year now, but I bet she gets carded for decades.

Since that recruiting visit, she's made a few digs on the court where I could have sworn she was actually flying. I mean, she has this ability to spring after balls and seemingly stay inches off the ground for a really long time before popping the ball up just milliseconds before hitting the hardwood - usually right to the setter, I might add. Maybe some of my apprehension about a transition to setter last year was out of selfish motivation to continue to watch her as a libero. Her 2008 season at that position was a treasure.
Through the years, Lo will admit she's had bouts with longing for home and struggles with nagging injuries. However, despite being far from home and spending too much time hurt, I, for one, have always found her humorous and good natured about it all As a professor, I'd be remiss if I didn't print that she is an incredible student.
Laurel was gracious enough to respond to my long-winded questions and a transcription of our interview follows:

SFAVolleyBlog.net: First off, everyone calls you “Lo”. Set us straight on when and how the nickname began?

Laurel: My nickname came from one of my old teammates from club when I was 12. We had another girl on the team named Lorna, and we could never understand who Rick (our coach) was talking to between the two of us. She started calling me Lo, and she stayed with Lorna. I don't even think she would remember that she started it. Turns out, Rick never called me that anyway, but pretty much any teammate I have ever had calls me Lo now.
SFAVolleyBlog.net: Last year, you shifted from libero to setter. For you personally, which position, libero or setter, presents more of a challenge?
Laurel: Both positions are challenging, and that's why I like them. Both positions come with the responsibility of providing extra leadership. Setters and liberos touch the ball more than any other players on the court, so there's the added risk of having the opportunity to make more mistakes. Being a libero is more mentally challenging for me because honestly, I would rather never serve receive a ball again. It's my least favorite part, but I do it and then after that one pass I get to play defense, which is my favorite part. I like being a setter, too, because you get to outsmart the other team. I love making the other teams' middles look bad when they completely miss a blocking assignment. There's a signature word every middle says when they get tricked by a setter, and I love to hear it, but it's a little too R-rated for print.
SFAVolleyBlog.net: When you came to SFA as a freshman, there was an adjustment period to being far from Indiana and certainly a culture shock of moving to East Texas. Who do you remember as the most instrumental people in making you feel more comfortable living and playing here?
Laurel: When I first came to SFA, all I wanted to do was transfer out. I thought I made a huge mistake and just wished I could go back closer to home. The people who where there for me most were my teammates. They helped me get through my homesickness and trying to deal with a long-distance relationship at the time. Coach B [ed: Brian Yale] and assistant coach Erin [McClanahan] also helped. I talked to them to try to get a better perspective on everything. Actually Erin and I went to Chili's one day, and she told me to just give it a full year. She said it changes a little in the off season, and I needed to experience everything before making a decision. It was still hard for me, but every semester got easier, and I'm so glad I stayed. I've met some amazing people down here that I would have missed had I moved back North.
SFAVolleyBlog.net: I've had the pleasure of talking with your Dad at or before several matches last year. He comes a long way to see a decent fraction of your matches. It that a source of pride for you, personally? Have your parents always been a big part of your volleyball career?
Laurel: I've very lucky my Dad has the opportunity to come to so many matches. It's nice to have someone in the stands who thinks you did awesome (or at least says you did) even when you know your play wasn't that great. My Dad has been on board for a while with me playing volleyball. My other number one fan, my Mom, doesn't have the opportunities to get down here, but she's always at the northern tournaments and will be here for Senior Night. She started me in volleyball when I was 10 and went to every club match I ever played, so they've taken turns in seeing me play at different levels.
SFAVolleyBlog.net: Coach Humphreys has used the phrase “player who is like an assistant coach” when describing part of your role. Do you embrace the “senior/leader” label or is that something that comes less naturally than actually setting and digging balls? 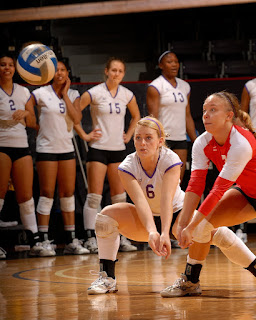 Laurel: I absolutely embrace the leadership role, and it comes more naturally to me than the skill set needed for volleyball. Coach tells me that I need to be the coach on the floor. She knows I have already accumulated a background in coaching and can use that experience to help other players on the court. I always tell Coach B that I think we're similar in coaching styles. We're both analytical and try to find the best ways to outsmart the other team. I've really become a student of the game, trying to learn as much as I can, not only for my last season of competition but for my future as a coach.
SFAVolleyBlog.net: Fans have also been able to read your own blog entries over the last few years. You chronicle a lot of the time the club spends on the road. When you and your teammates are all together, are there certain characters that emerge on the team - such as team prankster, team bookworm, Ms. Mischievous, shopper extraordinaire, etc..?
Laurel: If you think this interview is long-winded, you should see the pre-edited blogs I write about our travels. If I could write about every funny thing that happened, my blogs would become novels. There are pranksters for sure...namely Ari. One time she and a few others barricaded the door with cups and the water cooler at McNeese so the coaches couldn't get in. Mel and Sabrina are probably the most studious on the bus. MC is definitely the shopper. Plus, MC sits in front of me on the bus, so we have our own inside jokes that entertain us. Yes, we have our own seats on the bus that we always sit in. Coach doesn't assign them but seniors sit in the back, freshmen in the front. That's just how it is. When Ari and I first meet people, we're really shy, but once you get to know us, we can be the loudest ones. MC hates public speaking, but somehow always gets picked for on-camera interviews. She always does it, of course, but it's not her favorite thing. It's fun to see the different personalities emerge and mesh.
SFAVolleyBlog.net: Finally, in your bio on the team roster page, I notice an accolade of “All-Duneland” conference for three years of high school. Excuse my poor geography, but are we talking dunes in the desert sense here? Does Indiana really have sand dunes?
Laurel: Yes, Indiana does have sand dunes. That's why I played in the Duneland Athletic Conference in high school, and why my club team was called Dunes Volleyball Club. I live at the very northern part of Indiana along Lake Michigan. We have beaches that erode and build from the wind off the lake. I would liken it to snow drifts in the winter, but considering the audience, I'm not sure if that helps. There's actually an Indiana Dunes State Park.
Laurel even provides a pic for proof!! :