The Southland Conference Has Lost Its Serving Mind!

I'm a statistician. It's what I do.

This post is short and sweet.  I've covered this topic before, so I won't belabor it.  I think there are players that rack up a ton of aces, but this is offset - and then some - by boat loads of errors.  I think many people see the aces totals and believe this helps their teams.  I disagree.

If a player has 47 aces and 77 service errors, then you have to demonstrate to me 30 non-ace definitive times that their serve has manifested itself in a point immediately following the serve without rally JUST TO BREAK EVEN.  Once these 30 times have been demonstrated, this server has had the same impact on scoring as someone who has zero aces and zero service errors, or 20 service aces and 20 service errors.  This assumes, of course, that these last two servers NEVER had situations where their serves resulted in non-ace, yet immediate scoring opportunities for their team (which probably is not true and thus makes the 47 ace, 77 error server still look less valuable than them).

Think about what has been written above.  Really think about it.  We glorify aces, but turn our back on a mountain of errors.  Have we lost our minds?

Now, here is a graph of the Top 40 players in NCAA Division I volleyball in aces.   The horizontal  axis is aces and the vertical axis is service errors.  Can you spot the outlier?  Hint:  47 aces, 77 errors. 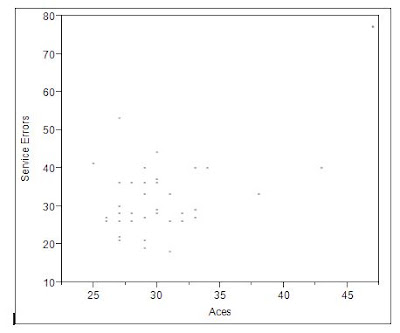 Look at where the bulk of the data lies and then consider this:  If you remove the outlier, there are a total of 1100 aces represented and 1152 service errors- two values that are roughly the same when considering there are 40 players represented.

In fact, just to add a little statistical flavor to this, if you calculate the correlation between aces and errors WITHOUT the outlier, you get a correlation coefficient of r =.17. For the nerds among us, the p-value for that being significantly different than zero is .30.  So, simply speaking, without the outlier, the above cluster of points is essentially random scatter.

Four of the 40 data points in the above graph belong to Southland Conference players:

Nicholson's data point looks slightly out of line with the national trend among ace leaders, but Schnars is the outlier.

I picked Devaney Wells-Gibson as my player of the year last year in part... I emphasize IN PART... due to this type of analysis.  And, I will reiterate one more time for the record, that I have ZERO qualms with Schnars winning last year.

By the way, Northwestern State leads the nation in service errors and UCA is second.

Aggressive serving to the point of being an outlier as mentioned above?  I say it isn't worth it.  And I'd coach the player to stop.  You'll need to provide me with quantitative evidence to the contrary to get me to change my mind.  Don't start telling me anecdotal stories of getting teams out of system here and there.  Service errors give the other team a point 100% of the time they occur.  I want data.

Has anyone else noticed all this?

Last night in San Antonio, the fans in the McDermott Convocation Center and those of us viewing online sure got our money's worth.  Well, given it was free, I guess we got way more than our actual money's worth out of the match between SFA and UIW.  There were several story lines and I'll try to scoot through them all at some point in this post, but the libero swap between the 3rd and 4th sets is what I want to focus on.

You will occasionally see teams switch liberos in the middle of the match.  Almost always it is due to poor performance of the original starting libero.  Often in cases such as this,  a team doesn't have a particularly strong libero and if adjustments have to get make in-match because of performance, two girls will switch out and put on new jerseys.  I recall seeing this happen several times in Southland Conference play over the past few years.

That wasn't what happened Thursday night.  What happened Thursday night was a masterful counterpunch to the University of Incarnate Word's strategy.  In the process, it showcased just how deep the back row is of Stephen F. Austin and in particular, just how improved sophomore Lexus Cain is when compared to her already strong showing from last year.

No, Thursday wasn't about back row problems, it was about back row dominance.  Earlier in the year at one of the tournaments we played in, Debbie Humphreys told me right before the match that she had talked to her offense about consistently hitting and serving away from the other team's libero.  This is clearly what was going on last night from UIW's standpoint.  I went back to look if I could dig up the reception numbers, but the StatTracker had been reset for UIW's game vs. Northwestern State tomorrow.  I do specifically remember at one point seeing that Cain had 30 service receptions compared to OJ Olson's 9.  Clearly, Incarnate Word was attempting to avoid Olson and make others pass and dig around her.

On the surface it seems reasonable.  Olson is going to be in the Libero of the Year conversation at the end of the year.  At least one reason I am writing this post is in the hope that some voters will realize after her 12 digs in five sets last night, she should be considered MORE for the award now than before.  Because HER stats don't tell the story. The respect that UIW has for her ability is what does.

The problem with UIW's seemingly reasonable strategy to hit and serve away from Olson has one flaw:  Lexus Cain is really freakin' good.

Knowing this, after SFA lost a marathon third set that saw the 'Jacks negate six straight UIW set points, 28-year savvy veteran coach Debbie Humphreys had Cain move into the Libero spot and Olson switch to support.  Think about it.  Now what?  At this point, UIW is forced to do one of two things:  1) They can stick with their strategy that by now has been both mentally and physically ingrained into their hitters for three sets:  hit opposite the libero if possible.  If they do, Olson may be in better position to dig/pass. Or, 2) go away from the game plan and start hitting at Cain in the libero jersey.  Only problem is, Lexus Cain is good enough to play libero right now for some of the schools on our schedule.

After the switch, SFA got the lead at the 4th point of the 4th set and despite UIW playing close, never relinquished it and won to tie up the match 2-2.  Then, in the decisive 5th set, the Ladyjacks jumped way out to a 10-4 lead only to see a feisty Cardinal team scratch all the way back before SFA finally closed out the match.

Give credit to Incarnate Word.  They played well, and much like McNeese the week before, gave SFA all they could handle.  Downright scary at times.  Freshman Autumn Lockley is a great complement to the underrated Angelique Vidaurri and the much improved Bryaunea Hall.  But, when you've got TWO stellar back row players like Olson and Cain, SFA really doesn't lose much by switching the two of their roles. At that point, UIW was forced to either stick with the main gain plan or come up with their own adjustments.  In the end, going away from Olson led only to SFA having FIVE girls in double-digit digs. Everyone had Olson's back and it was beautiful to watch.

Now, I realize that UIW could have easily won that match and if they had, I probably wouldn't be writing this.  But hey, when changes work, they make coaching staffs and teams look like geniuses and I haven't been able to get the whole libero switcheroo out of my mind all day today.  It was just awesome to see that move pay off and see the 'Jacks win a very emotional five set thriller.

We've already mentioned the amazing third set that went to 31-29. There's a decent chance that will be the longest set SFA plays this year.  Reflecting on that set, and then reading Humphreys game wrap quote that "there are definitely some things we have to improve on" leads to finishing this post with a two-up, two-down approach to get you to think on some of what she might be referring to.

SFA has GOT to get off to better starts.  We are 11-8 on the year, but just 8-11 in first sets.  Too often, an opponent has come out of the gate firing on us and put us back on our heels.  We never lead in Set 1 and found ourselves down by as many as eight against UIW.  Again, credit the Cardinals for a well-played set, but the 'Jacks need to be ready to roll from Serve 1.

Second, these leads!  We have to hold them when we get them, right?  I guarantee you Humphreys was impressed with the fight displayed by the team in losing Set 3 (that's actually one of the Ups below), but hey.. we were ahead 18-12 in that set!  It shouldn't have gone to 31!  After the score was 18-12, UIW scored 10 of the next 11 points.  That can't happen.  I've already mentioned we were up 10-4 in Set 5 and that evaporated as well.  So, look for SFA to improve upon sealing the deal when they are up five, six, seven points late in sets.

Say it with me:  Abigail P. McIntyre.  Actually, her middle initial isn't P.  At least, I don't think so.  And, well, I don't even know if her birth name is Abigail either, but it sounds cool. My point?  We are watching McIntyre flourish into a much better all around player here in Year 2.  She was amazing last night.  Are you kidding me?  Almost a triple-double?  14 kills, 12 digs, 7 blocks and 3 aces.  Yeah, that's good.

Second, I love the team "fight".  No backing down.  I asked Humphreys after the five-set comeback against Tulsa if that was a match that they could look back on if they got down during SLC play to remind themselves that they could scratch back.  Just call me Prophet Blogger.  No, wait.  That sounds stupid.  Abigail P. McIntyre sounds better.  But, I digress.  The point is that in the Tulsa match, and others, the team has developed some edginess and resiliency.

Oh, and one last thing.. don't mess with our back row.