For the full interview with Julia, you should click here to go to our SoundCloud audio site.

Honestly, I started this blog back in 2009 to showcase folks like Julia Whitehead.  I hardly imagine that anyone could think of the SFA Volleyball program over the last few years without also thinking of Julia.  At this point, she is THAT central to everything that goes on around the club.  You know her now.  You knew her as a player.  But, you might not know EXACTLY what her current role is called.  Officially, she labels herself as a Graduate Assistant, but that's just too tame.  It just sounds too boring for Julia.  How about something more like "The Incredible Do-Everything That Needs to Be Done and Other Stuff that No One Will Ever See All While Always Smiling and Helping Anyone That Has Anything to Do With SFA Volleyball Person".  Yeah, that's a better title.

Julia is infectious.  Not in the yucky COVID way, but in the positive, inclusive and humorous way.  Literally.. it is impossible NOT to like this gal.  She's just THAT good at what she does and THAT important to everything volleyball related at Stephen F. Austin.  Now, the overall script probably hasn't turned out the way she would have diagrammed it in her dreams.  After all, every athlete shoots for a big playing role on the team with lots of "camera" time, but that wasn't in the cards.  In fact, during her playing days at SFA, she saw the court very, very little.  I can't count the number of players that I have seen in her position just literally pack it up and fade into college life developing other interests and allowing athletics to do a slow burn.  Oh sure, most of those former athletes are out there doing great things in life, but in terms of volleyball, they are easily forgotten among the shuffle of players constantly coming in to the university.

This is especially true of young defensive specialists.  They were pretty much all stud liberos in high school and their club days, but have you ever noticed how many "freshman DS" players are listed on college rosters?  Start looking it up.  Lots of teams carry two, three, four of them.  Then, after a year in the college ranks, these folks are the most likely NOT to return the following year.  After all, they are "specialists" and if they aren't in line for the libero jersey during the middle of their careers, it makes it easy for them to walk away and say goodbye to the volleyball portion of their college lives.

All of that sounds really harsh, I know.  But, it truly is the reality of things.  Saying that, though, we should all step back and realize just how special it is to get the chance to wear a college jersey.  You have to be really, REALLY.... REALLY good at the high school level to ever put on a college volleyball jersey that says "SFA" on the front.  Every one of the athletes you see on our roster now or have ever seen on our roster was a truly special prep player.  Julia was no exception.  In preparation for doing this interview, I actually went back out on the web and looked up some of her recruiting videos on various websites.  Yeah, they are still out there.  I probably had seen them back in the summer before she arrived at SFA as I tend to do that sort of thing once we announce signings.  After all, it is my job to know our personnel well as they begin their careers here.

Videos aside, I really wish I had seen Julia play more live.  Yes, I was probably in attendance those few times she played in matches for SFA.  But, I mean that I wish I would have seen her live before she got here.  I love floor defense and it's easy to envision her as a true spark plug while in high school.  When it came time for her to come to Nacogdoches, she arrived on campus with Danae Daron, Ann Hollas, Corin Evans, Xariah Williams and several others.  All of those names just written saw the floor a ton during their days in purple, but sincerely, Julia will be remembered right alongside of those playing greats.

I think with Julia it's all about love of the program and true, true commitment.  You can either embrace your role or you can shun it.  Julia has embraced it and then some.  Oh, sure, sure.. you'll hear it in the interview:  Like any other athlete she worked for and desired more playing time.  She wanted to be the team's libero.  She wanted to put up stats, dig balls and earn accolades.  Any athlete that doesn't want those things shouldn't walk in the gym.  Julia very much wanted to play and contribute in a major way to the on-the-court product.  Of course, she did contribute, just in indirect ways that assisted others to be their best.  But, her junior year came and the libero position was in transition and wound up in the hands of freshman Sabrina Monaco.  Whitehead was the elder statesman of back row players and didn't wind up winning the role that she wanted most at the time.  As a accent point to my statement about freshman back row players.. guess what happened to Monaco after her freshman year?  Yep, she left.  See, it's a position ripe with attrition.  We transferred in Maddie Miller and that coupled with other things led Monaco to step away even after garnering lots of playing time.

By that time though, Julia had made her own personal decision to transition as well.  But, as she puts it in the interview, head coach Debbie Humphreys wouldn't let her walk completely away from the program.  I've seen Humphreys' wisdom in personnel decisions over and over and OVER through the years and Debbie was wise to keep Whitehead around.

Julia is unbelievably valuable.  A cheerleader.  A confidant.  A mom-like figure to the younger players.  An organizer.   A shoulder to cry or laugh on.  Take a look at the photo below.  There she is - right in the middle of things pre-game at UNT last year. Shoot, Julia has even been the one that saves me a seat on the bus.  You see, I've started travelling with the club on road trips this year in order to help out with our budget.  This seat-saving thing is wonderful.  It keeps me up front with the coaches, trainers, managers and Julia where I belong!  I love being around all these players but they don't need/want me back there with them and I'll be honest and tell you it's mutual.  At dinner?  At social gatherings?  Around the court?  Oh sure, put me next to any one of these players - they really are all a delight.  We all get along and they make me feel very welcome in all those situations.  But, a six hour bus ride home late at night after a long weekend?  Yeah, front, please!  So, thanks for that, Julia! 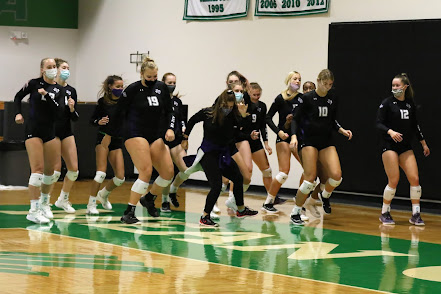 Julia is trustworthy.  We need her to be.  She handles so, so many things behind the scenes that no one sees.  From keeping track of all of our meal orders on the road to consoling with players about the demands of coaches, Julia is always there.

I want everyone to think about how much time all this takes.  That's one of things that I've always wanted to accent here at the blog:  the TIME it takes to me a part of a collegiate athletics program.  The players and coaches sacrifice a tremendous amount of their personal time.  Actually, all of us do.  The time commitment for what a broadcaster does is, frankly, quite immense (that is, if you care about doing it even half way well), and what the athletes do trumps that by orders of magnitude.  Honestly, the casual fan has no real sense of how much time, dedication and discipline it takes to be a student athlete.  Julia is STILL making these sacrifices despite a) not playing much in her jersey days, b) being in graduate school and c) having tons of reasons to just let volleyball go.  Instead, she's focused on all the reasons to keep volleyball around.  She's created an incredible niche for herself.  She's exactly the kind of help and support and friend that every single program needs. 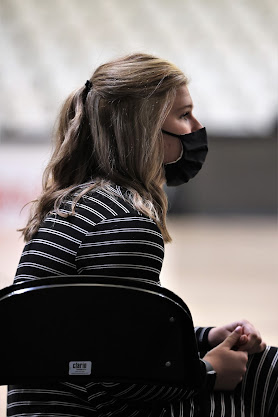 Julia never filled the stat sheet as a college player.  But she's filled each of us that have intersected with her full of something much more important:  Respect.

She has 100% of mine.  One. Hundred. Percent.  Listen to the interview linked to above and let's shine a huge, huge purple spotlight on an absolute gem.  Thanks so much for your dedication, Julia!  All of us around the club know how much of a 'rock star' status you really have. Your smile and loyalty is reflected in all those banners hanging in Shelton Gym.

Every one of us should always remember that there are people around this team that are every bit the 'champion' that the star athletes are:  the trainers, the managers, the support staff, the game day staff, the gym custodians, the "Incredible Do-Everything That Needs to Be Done and Other Stuff that No One Will Ever See All While Always Smiling and Helping Anyone That Has Anything to Do With SFA Volleyball Person".  Yep, it takes a family, and Julia is as key a member of the SFA Volleyball family as we have.