For the full audio of the conversation with Bryli Contreras, click here.

You know the type.  That casual sports fan that doesn’t understand why the wide receiver can’t catch a throw from the quarterback.  Or, why a batter would swing at a curveball that bounces a few inches in front of the plate.  What about the guy or gal that laments why a player on their favorite team can’t keep the opposing point guard from driving right past them to the basket?  We’ve all been “that fan”. We love to criticize from the safety of our recliners in our living rooms and talk about sports performance as though it’s easy peasy.  The fact is:  It’s harder than it looks.

When you watch a volleyball match from the stands or on your screen while sitting perpendicular to the net, you aren’t doing most serves justice.  This is especially true of serves that are categorized as floats.  To really appreciate the difficulty of receive, you should relocate to behind the receiving team and watch the serve approach you.  Knuckling.  Weaving.  Dropping.  Curving.  Zig-Zagging.  The words will all come rushing to your head.

As far as digging balls to target: Go stand twenty feet away from someone and let them throw a ball at you as hard as they can and see if you can a) even truly get your hands on it – and then if you can – b) can you pop the ball up to a prescribed height roughly half way between you and the person who chucked it at you.  It’s harder than it looks.

My favorite position in volleyball is the defensive specialist (DS).  Well, if I am being honest, it’s the libero AND the defensive specialists.  That’s because my favorite component of volleyball is floor defense.  I love in-rally “digs”.  It’s the part of the game that gets me the most enthused when I see it done well or a spectacular play made.  Sure, everyone loves the big kill or monster block or ace.  But, the sprawling dig to target that resets the offense or that perfect platformed dig in which the DS is anchored down on the floor after that huge attacker just shot a bazooka down the line?  THOSE are my favorite plays.  Anyone listening to the match on radio down at Corpus Christi knows that I about lost it when Coco Gillett went flying to the floor for a ridiculous pancake dig in the middle of a key rally.

Today’s feature is on Bryli Contreras.  At present, Bryli is our main DS.  Recently, she has been coming on the floor when fellow freshman OH Leah Powell rotates back row (Rotation 5, serving first).  Contreras comes into serve (generally,  our 5th server if we served first) – which she’s ultra-good at, and then take a stroll along the back row for three turns (rotations 5, 6 and 1) before giving way to Powell. 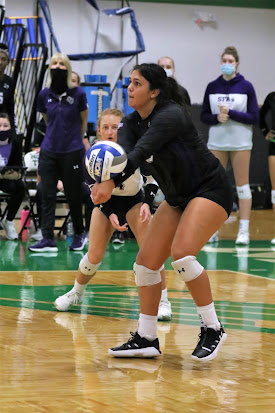 One of the things you’ll notice about Contreras is that she is under control as a back row player at a higher rate than most other young defensive specialists.  Some DS’s are flashy (but not really that good) and others are steady.  Contreras is steady.  That’s not to say that she can’t make those plays where the right side gets robbed on the huge attack or those quick twitch plays to keep balls alive that begin to ping-pong around on our side of the floor.  She can do that.  But her demeanor and court presence are steady.  It’s workmanlike and right now, she a great reflection of libero Maddie Miller in that way.

It’s too early to tell whether Contreras is the heir to the jersey once Miller bids the court adieu in the fall.  But, unless you want to convert an outside hitter and lose some offense, I really don’t see anyone currently on the roster that would be a better choice.  Of course, at the rate at which we are recruiting now, there could be another high school libero as talented as Contreras was last year waiting in the wings.  Still, her usage patterns of late indicate she has gained the trust of the coaching staff.  It would seem that she projects for a role at least equal to what she has now going forward – if not more.

In this space this year I’ve mentioned a couple of times that broadcasters and people who write and speak about sports would do good to observe (and usually, observe quietly).  This is something I really try and do.  Just watch.  Soak things in and think (rather than talk).  After all, I have to talk in order to call games, but when I watch volleyball at a practice or on television, I usually try and do so without talking.  That way, my brain can work.  One super obvious observation about Contreras is that she is polite.  It’s unmistakable.  I call gals like her “raised right” athletes.  You can tell she was “raised right”.  I write that with no implication that her teammates weren’t as well.  I just mean that Contreras is respectful, conscientious, and attentive.  These are positive qualities in an athlete and frankly, in just a downright good person.

If you pay attention, you can also firmly see Contreras is rooted in her faith and family.  People that are rooted in things don’t have to try to convince you of their priorities.  Instead, they just naturally show up in their actions, speech and decision making.  I can see, even in limited interaction, that Contreras has a solid priority list in life.

In the interview linked to above, you’ll hear her talk about what makes a good passer.  Notice, she doesn’t speak to the physical side of the task as much as she reminds us of the mental side of sports.  I also asked her about what makes a good floor defender.   We also talk about the role of being a DS after having been a libero at lower levels for so long and what adjustments that requires.  We discuss the correlation between working on serving and serve receive and then the difficult task of being a freshman student athlete. 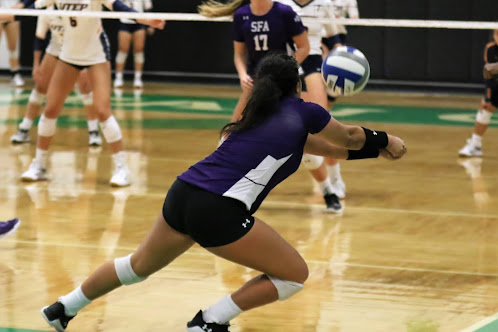 I’ve always thought DS’s were overlooked and didn’t get enough “glory”.  That’s the word I use in the interview:  glory.  For instance, here is a stat for you.  After all, you didn’t think you were getting out of this article without any stats from the statistics prof, right?  A crude (accent on crude) way to normalize digs/set to role is to factor in rotations played.  For instance, with the exception of waiting for one side out to return to the floor, a libero will play in six rotations.  Maddie Miller as of this writing is averaging 4.60 digs per set, which equates to 0.77 digs per ROTATION per set.  Six rotation outside hitter Ariana Pagan is second on the club in overall digs per set, and her rate equates to 0.43 digs per rotation per set.  Contreras’ dig rate is equivalent to 0.56 digs per rotation per set.  Of course, Pagan has a more diverse role.  However, the point is (crudely) made:  Contreras’ rotation value is substantial, while as expected, not equal to the liberos.  Interestingly enough, Allie Hamsher’s dig equivalency per rotation is 0.63.  That has some pros and cons to being that high, but I digress.

Back to the glory idea… DS’s deserve more glory.  It’s harder than it looks.  But, when I brought this up to Contreras in the interview, she deflected.  You’ll hear her say that her teammates let her know that her role is valued and properly acknowledged.  So, there you go “armchair quarterbacks”.  Those of us that just watch sports and mouth off about them should learn from Bryli Contreras.  The players that don’t have Contreras’ role know how challenging it is.

I’m just glad she’s getting valuable court time while so young.  Who knows what might become of it?  Opportunity begets opportunity.  It will be fun to watch what Contreras blossoms into during her time with us.  For now, let’s shine the purple light on Bryli Contreras and remember… give the DS’s their due glory!