From Red to Purple: Maddie Miller

San Antonio - Ladyjack libero Maddie Miller has spent each of two years in two places.  Now, as the Southland Conference slate fires up for the final time for Miller - she will come full circle.  The current Ladyack libero began her career in UIW Cardinal red and now returns on Saturday to the McDermott Center that she used to call home.  It's not her first time back, but it will be her last time in San Antonio to wear her collegiate jersey.

No matter the color of that jersey, one thing has been always true:  Miller is a back row anchor.  She was during her first two seasons at UIW, and is currently for SFA.  Miller came to San Antonio during the year that turned out to be former head coach Jennifer Montoya's last season at the helm of the UIW program.  "Honestly, I loved going to school here as a freshman", Miller said at breakfast early Friday morning  - the team still in Corpus Christi after a long two hour plus battle with the Islanders the night before.  "I loved all the girls that I got to meet and play with when I first came to UIW", she added.  We talked and traded names of players that she played alongside of and that I remembered from having called matches between SFA and UIW - including two that Miller herself suited up for in UIW colors.  "A lot of us left for various reasons, but I still keep up with many of my former teammates, coaches and assistant coaches", Miller said.  She specifically referred to current Cardinal setter Pilar Gonzaba as we chatted about the differences between her first and last two seasons.

Miller will step onto the floor Saturday with exactly 1700 career digs at the D1 level.  Two 400+ dig seasons as the libero for the Cardinals her first two years were followed up by a monster 2019 in Ladyjack purple which saw her scoop just five balls shy of six hundred.  That tally constituted the seventh highest dig season in recorded SFA Volleyball history,   That's pretty impressive considering that six of the top season marks belong to Stephanie Figgers and OJ Olson, two of the best liberos in program history.  At her current pace, Miller projects for somewhere safely above 1900 career digs, with an outside shot at the nice round number of 2000 if SFA can both play deep in the Southland Conference tournament and make a third consecutive NCAA tourney appearance.

For some perspective, while Miller won't crack the career digs leaderboards at SFA having only played two seasons in Nacogdoches, only three liberos have ever tallied 2000 digs as a Ladjack:  the previously mentioned Figgers and Olson along with Maddie Hanlan.  Miller's career mark - if it were to have all been at SFA - would have currently ranked fourth all-time only behind those three ladies.  During 2019, Miller averaged 5.31 digs per set, a mark only bettered by Figgers - albeit three times. 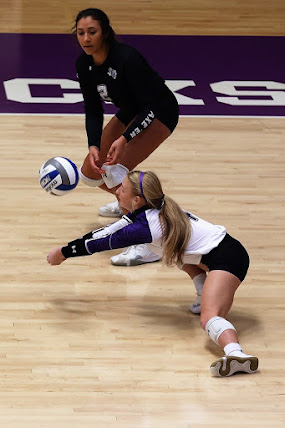 In terms of demeanor, however, Miller couldn't be more far apart when compared to Figgers and Olson.  Miller is unassuming and not a loud person by nature.  She's plenty vocal on the floor to exhibit her queenship over the back row, but generally, Miller is more reserved and plenty humble - always allowing teammates the limelight.  Figgers and Olson both were folks you heard the minute you walked by any room they were in - cackling and howling most everywhere they went.

Since the institution of the libero position in women's collegiate volleyball, SFA has truly had some amazing athletes at the position:  Figgers, Olson, Hanlan, and add in Lexus Cain, who ranks fifth all-time in digs as a Ladyjack.  All things considered, it's amazing that despite only two years as our starting libero, Miller is right there in that conversation. Personally, I think because she played at another Southland school and we were all familiar with her before arriving in Nacogdoches, it gets easier to keep her in the conversation of all-time greats.  You see, Debbie Humphreys and current assistant coach Alisa Blair have a long history with Miller and her family.  There is a deep familiarity which actually makes it seem like Miller has been with us longer  than just two full seasons - even though this last one is being stretched across the fall and spring.

In fact, I wrote about Miller briefly while she was still in San Antonio,  After talking with coaches and watching her play a handful of times in 2017-2018, I wrote that I thought she'd be a candidate for Libero of the Year honors at some point in her upperclassman years.  Little did I know that it would be playing for SFA.  "A Diamond in the Rough" is what I referred to her as in my post picking my 1st Annual All-Sophomore Team" in 2018.  You can read the post at this link.  That same year, she was a "just missed" pick for my All-Conference Blog picks. 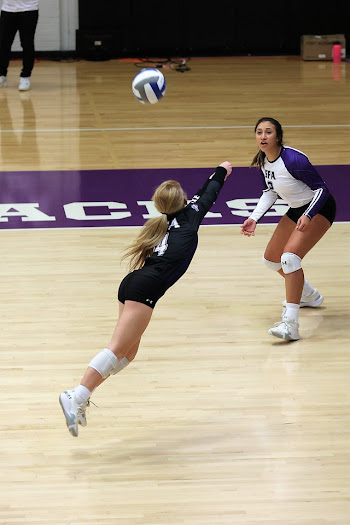 Nothing is "just missed" about Miller at this point.  Completely entrenched in the libero role, whomever wears the jersey in Fall 2021 will have big shoes to fill.. figuratively, of course, since Miller is 5'3"... maybe!  At least that's what we list on the team roster.  But, height is the only thing truly diminutive about Maddie Miller.