For audio of the entire interview with Allie Hamsher click here.

There are times during a program's history where a player and a position become synonymous for a long stretch of years.  To wit, Lauren Railey at outside hitter during the middle '00's.  Then, there is the greatest libero to ever wear purple - Stephanie Figgers - during that same basic era.  The record book is full of the name Aubrey Duncan as a defensive force during the early 1990's. Two setters that quickly come to mind are JJ Jones during the same time frame as Railey and Figgers and the recently graduated Ann Hollas.  I've been fortunate to see some of the great SFA setters play their entire careers.  I didn't see Wendy Walling (1990-1993) or Bianca Aranda (1995-1998), but I saw all of the Jones and Hollas years along with the time Marissa Dorcheus (1998-2001) ran the club.  I personally called virtually all of the matches Paige Holland (2011-2014) was a part of during her Ladyjack tenure.  Dorcheus, now Marissa Avery, and I still occasionally intersect on social media and she was the SFA setter during the time that I first began attending Ladyjack Volleyball matches.

So, why the archival lesson? Because SFA is always looking around the corner hoping to discover "our next great setter".  At present, my thought process is that we have a trifecta of setters that collectively achieve greatness.  This isn't meant as a slight to any of the individual players that make up the 2021 setting roster, but instead I see the combination of our setters as merging in a unique way since they each bring different qualities to the table to achieve their effectiveness.

When Hollas graduated, that automatically meant that we were going to have a "new" setter in 2020-2021.  This because Margaret Dean also committed as a graduate transfer to Mississippi State back in April of last year.  Dean is currently playing out her last year of eligibility in Starkville.

So, rather than put all the eggs in one basket, the coaching staff brought in transfers Allie Hamsher, a decorated JUCO two-year athlete from North Central Texas College (NCTC) and Malgorzata "G" Andersohn who had spent her first year at Arkansas State.  The wisdom in those signings was the experience factor.  Hamsher already had success at a lower level and was ready for a step up and Andersohn had gained experience by appearing in all 30 matches for the Red Wolves, who play in a conference comparable to our own.  Those two join freshman Maddy Bourque to give the 2021 version of SFA Volleyball a veritable three-headed setting machine that can interchange parts fluidly and efficiently.

The interview linked to above is with Hamsher, who has emerged as the leader of the aforementioned crew primarily due to her experience and consistent productivity.  As of this writing, Hamsher leads the club in assists and assists per set and has appeared in more sets during 2020-2021 than either of the other two quarterbacks.  Hamsher has also proven to be a deadly server, racking up 17 so far on the season, four of which came last Saturday against Tulane.  Behind libero Maddie Miller and six-rotation outside Ariana Pagan, Hamsher also ranks third in digs for the Ladyjacks. 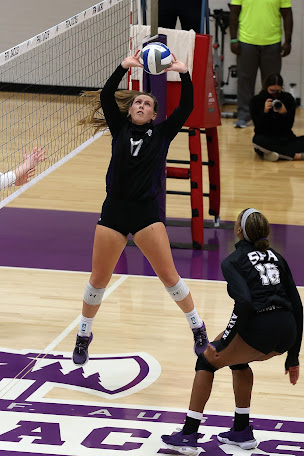 One of the portions of our chat that I absolutely loved was when I asked her to compare and contrast herself with Andersohn and Bourque.  Her answer was exquisite and framed exactly in the way that my mind had processed the three of them to this point in their time with us.  Pay particular attention to her phrasing in answering this question around the 8:00 mark in the interview.

Something that folks in my line of work always do is observe.  People who call matches are always watching. We take note of the smallest of things in order to constantly add to your familiarity of the athletes that you are going to discuss and showcase when on a broadcast.  One of things I've really noticed about Hamsher in matches, practices and even in brief off-the-court situations is that she is emotionally invested.  She brings a lot of energy and joy to the position.  Sometimes, on air, I refer to this personality as what I call a "warm setter".  By her own admission, she's not the cold and calculating technical setter, but instead delivers a quality ball while mixing in the right dose of fire and energy (warmth) for her offense.

I think the time playing meaningful minutes for a club that had a lot of success at the JUCO level has really helped Hamsher slide over into her role this season at SFA.  She's steady and personally very likable.  That personality blends well with her attackers on the floor and with the entire club when they are not in competition.  She's vocal and authoritative and that's a positive quality in a setter if kept under control - which her poise allows her to do.  She instantly finds herself as one of the most experienced collegiate players on the roster being one of only three upperclassmen.  So, she needed to come right in and lead and garner faith from the rest of the younger, more inexperienced freshmen and sophomores.  It's clear that she has their trust. 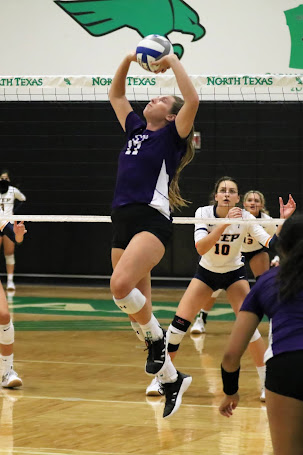 Amazingly, you'll learn when you listen to the interview that she almost let volleyball go during her final year in high school.  Given the talent she possesses that surprised me a bit, but it points to maturity.  She was comfortable considering the possibility that her playing days might be running their course, but opportunistic enough to take advantage of an offer that would allow her to see if she could still produce at a high level.  I often tell students that "opportunity begets opportunity" and that's exactly what happened with Allie Hamsher.  The chain reaction of opportunity from high school to NCTC and then to SFA has carried her further than her high school self had the wherewithal to imagine three years ago.

"Shining Purple Lights On:" is a new weekly interview series that will showcase an athlete, coach or team personnel member associated with SFA Volleyball.  It's your chance to learn a little more about a member of the current Ladyjack Volleyball family.