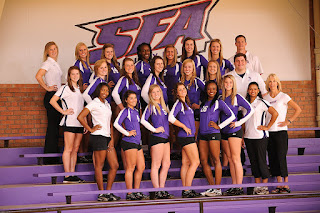 It's a little too early in the semester for that first big exam in all of our college courses. But, the 'Jacks will re-open the Shelton Gym era with quite a test as Texas A&M and Northern Illinois come to town this weekend. Both clubs recently received a handful of Top 25 votes in the latest NCAA Divsion I AVCA poll. Reports of these teams being Top 30 in the country are probably slight overstatements given they only appeared on a scarce few number of ballots, but the point is well-taken: We will be the underdog twice this weekend.

To this point, Debbie Humphreys scheduling has been with the purpose of putting SFA against teams from similar conferences and/or similar strengths as what we expect to face in Southland league play. I like both that idea and the current one of mixing in a few even tougher challenges before conference play settles in.

The best thing about this weekend is that we get to play at home after having been out on the road for almost a week. The travel strain showed as SFA put up possibly their weakest effort of the season on Labor Day in a three-set defeat to North Texas. The Ladyjacks service errors doomed them in Set 1 and by the time the blowout in Set 2 was done, we were basically already back on the bus. Everyone knows we are capable of much higher quality play than what was shown in that match and I'm sure the club will be out to prove it against NIU and Texas A&M.

The Ladyjacks came within a single set win of taking home their second tournament title this year while in Martin, Tennessee last weekend. Brief conversations had with a couple of folks revealed high praise for Illinois State. Despite getting out to a 2-0 lead against the Redbirds, Illinois State put up three straight set wins and kept SFA from returning to Texas with the tournament title. MC Bottles and Sabrina Burns were honored with All-Tournament accolades for their performance. The honor marked the second in as many tourneys for Burns who is clearly improved beginning her third year in purple. Burns and Bottles play in middle has been quite solid with both hitting at or above a .300 clip while - as expected - also leading the team in blocks.

I think I might have been just a year early last year when predicting Burns' breakout. Both in practices I've witnessed and in game situations she is making contact with the ball more flush and with more strength. The result has been less mishits and more thundering shots from above defenders due to her height and reach. It's early, but Burns is hitting at a clip more than twice her .160 mark of 2010.

I watched the UNT match live on the computer and have just chalked that one up as a mulligan. I also attended the ULM match at the beginning of the trip. We had a great crowd in the chat room that night and I went with more of a play-by-play style since StatTracker was completely down that night. Our next live chat will be October 5 from Huntsville.

I think most folks were disappointed in the Monroe match because of the fact that ULM has had virtually no historical success against SFA. I honestly didn't think we played all that bad that night. We just couldn't block a ball in the deciding fifth set as ULM didn't even make an attack error at all in Set 5. I also thought we should have gone to Bottles more in the clutch. MC only got ONE touch in Set 5 of that match and that's unacceptable. I thought it was good to mix in Jackson more in the 5th since Randall was just flat going off on people and starting to get keyed on down the stretch. I commented as much live in the chat room that night. But that being said, you just can't give Jackson and Pannone 10 balls between them while setting MC only once. Despite Randall deserving the lion's share of sets, if you are going to go down, you need to go down going to your best & MC is our best.

Honestly though, this team is off to a decent start. Despite losing three of the last five, we clearly should have won at ULM and had a really good shot at beating Illinois State. This weekend is going to be tough, but we look to be in good shape now that we are only a week away from opening conference play against Sam Houston.

The lineup looks pretty set with Bottles and Burns in the middle, Holland setting, Randall playing all the way around at OH, and Hanlan playing well at libero. Jackson has pretty much been a mainstay on the right side, but in occasional sets and a solo start, Gideon has been there. However, I think you can pencil Les in as a regular starter at this point. The final slot on the floor has an ebb and flow to it currently. It hasn't - and may not ever turn out to be - a six-rotation spot and has featured freshman Jill Ivy starting recently with the rotation spot being shared by another more defensive minded OH like Miksch or Pannone. I've already insinuated in another post that I think Mel needs a longer leash.

So, one question going forward is how much court time is divided between the three of Ivy, Miksch and Pannone. That will be an interesting rotation spot to watch this weekend. There is also the issue of time for Amanda Hall who has earned a start and additional back row time to stabilize passing and defense at assorted times. I think she's been a pleasant contributor in spotty situations. Freshman Janet Hill played a bit more in that role early on in the year than what she has recently. Hall's experience and ability to hit may be winning out on the back row DS time that always seems to be floating around in limited amounts. But still, Hill stands to get looks here and there.

I think it appropriate to compliment Holland on her work to this point. She looks pretty steady and issues like the one I raised earlier about Set 5 at ULM are minor in the grand scheme of things. I mean, think about it.. she is so used to going to Randall in critical situations because she's been on the court with her for years. And, its not like Katzy hasn't handled her opportunities well.

For strategic purposes, I won't get into specifics, but about a week ago former setter and assistant coach LA Lanford got Holland alone on a court during practice and was working on a variety of offensive "options". While watching the match against UNT, I saw Holland successfully integrate most of the things Lanford was working on during that practice drill. A few times, I was actually talking to myself in my office (shh, I was supposed to be working) pointing at the computer screen yelling "That's what LA was teaching her right there!!" Setters are always in the limelight and the positives from Paige have far outweighed any negatives in my mind. Debbie raves about her ability to quickly incorporate advice and I've witnessed it a few times from where I sit. She's been a big part of why we are 6-3.

This weekend should be really interesting. I got a chance to see the new media table that was installed in Shelton. It has "SFA Volleyball" plastered on it and looks really nice. Some paint on the walls at court level went up today and some additional trim work is planned for tomorrow as well. I won't give it away, but I've been given approval by the powers that be to add my own..... uhhhhh.. "decoration".... to the joint. You won't be able to miss it, but you may have to wait a couple weeks until it gets integrated into the gym's interior design.

You need to make time to be in Shelton on Friday at 6 PM and again on Saturday at 4 PM. If for some lame reason you can't be there, then just go ahead and block off the following weekend 'cause we'll dance again with three more teams coming to town for the Chilly tournament on the 16th and 17th!
Posted by Greg Miller at 7:57:00 PM
Newer Post Older Post Home