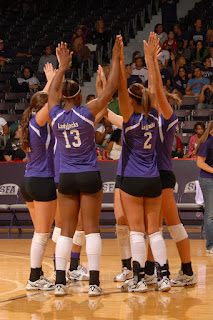 They're coming. From Illinois, Indiana, Wisconsin & Oklahoma: they're coming. From closer places such as the greater Austin and DFW areas....they are coming. Some of the girls are already here; others are literally driving in as I post this. But, they'll all be here - veterans and newbies - by the mandatory reporting date of Sunday evening.

A meeting last week with coaches to talk over ideas for occupying the space you are reading was filled with an eager vibe. At the end of last year, head coach Debbie Humphreys wrote that the clubs' final win-loss record of 20-9 was not up to par for the program. During our meeting, I floated out the possibility that such a statement might just be "coach speak". Humphreys stuck by her words while making one thing crystal clear: there is an expectation that the veterans on this team will take substantial steps forward. Additionally, the newcomers won't have much time to exhale once practice begins since they will definitely be integrated in a meaningful way from Day One. The overall goal? Let's just say it is not 20-9.

Both coaches and players have got a lot of work to do over the next few days. That countdown to the right of this post is under 20 days now. That's not a lot of time to get five newcomers blended in with the nine returning girls.

We've got a lot of work to do here at sfavolleyblog.net too. But first, if you haven't noticed, Assistant Director of Media Relations Ben Rikard has begun his own chronicle of the team over at the official site. He's also announced that Laurel Kuepker will handle the player blog duties this year. I'm thrilled this feature is continuing because of the inside nature of the player blogs: learning new vocabulary, memorizing every freaking La Madeleine and Chipotle location in Texas, figuring out where I should be shopping for my wife- these are all things I've learned over the years reading the player blogs. Hey..those player blogs have raised my game. I got called out one time in a player blog for mispronouncing a girls' name...see if I make that mistake again! [Oh, I will].

Plus, you won't want to miss Ben's spin on Ladyjack Volleyball. He's an excellent writer and if you don't read his "Weekly Releases" then you are about to get some serious homework assignments from yours' truly.

So, what's on tap here at sfavolleyblog.net? Sunday night is the kick-off-the-year team dinner (I'm on the invite list and I'm stoked about that). The team will practice twice a day beginning all next week and I'll be in attendance at least twice during those sessions. I'll check in with you next week concerning those activities and we'll also begin a series of 2009 Veteran Previews. The seniors will be the focus in the first installment. Check back here early next week to read the capsules on Bailey, Buckner and Milburn. But in the meantime, spread the word about our Facebook group and Twitter follows. Mark your calendars for the home opener on September 2 at 7:00 against Louisiana-Lafayette.

Quick sets from around the conference: UTSA and Lamar are having Alumni games against their current girls right before the regular season starts. Sounds risky to me....The article on the SHSU website announcing their girls' have returned to campus mentions beating us in the SLC Tourney in the very first paragraph. Fine. Ya know what: See ya October 21....Texas State is going to make players available for autographs after their meet-n-greet night. Hooray! Just what I always wanted: a Jessica Weynand signed headband. Not....UTSA is going to go to Hawaii this year. Expect them to lose a few to transferring next year... Half of the conference is advertising the Chop House Cheddar Burger from Whataburger on their sites. Stop it already....Oh, except Nicholls - they've got ads from an Anheuser-Busch distributor followed by ads from Coors and McDonald's...all wrapped up with an ad for a local hospital underneath them all. Coincidence?
Posted by Greg Miller at 12:04:00 AM