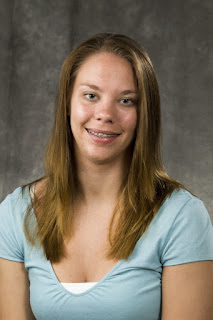 This is the second of what will be three posts which profile the veterans returning to the court for SFA Volleyball this season. The senior previews are below these and the sophomores get their turn in the spotlight next week. We certainly won't forget the fab five: the freshmen on Debbie Humphreys squad will get showcased in a different way than this. More on that next week. But without further delay lets look a little closer at the third-year players.
3 Laurel Kuepker 5-6 Setter

"There is nothing wrong with change, if it is in the right
direction." - Winston Churchill

Back in 2006 when All-American Stephanie Figgers was on her way to 756,215 digs or whatever I would often lament about how we were going to replace her when she finished her four year stint at SFA. One day before a match one of the coaches took me aside and told me to look over in the front row of the stands. "That girl right there....there's our replacement for Figgers over there" - I was told. "That girl" was sitting with her father taking everything in during a recruiting visit and I swear she looked all of 14 years old. "That girl" was Laurel Kuepker.
Kuepker wore the libero jersey in her first ever collegiate game and collected 22 digs in a tournament win against Montana State. That was then...this is now: Newsflash - Setter from '08 bolts for cheeseland and Lo's gonna set instead of play libero.
Fine. I trust Humphreys when she says that Kuepker can handle it. Hey, assistant coach Brian Yale ran an offense while at Bowling Green. Assistant Coach Erin McClanahan has a couple thousand assists in her past as a player. They know. These people know. Couple that with Lo's intelligence and the fact that setting is in her past as a prep player and I am totally a believer.
However, I'm a numbers guy and the numbers say this will be quite a task. Kuepker eventually gave way to veteran Jami Hill at the libero spot in '07. The team benefited - Lo benefited. It took some pressure off and ultimately paved the way for Kuepker to excel last year.
.
Let's just get this out of the way right now: Kuepker got robbed. I mean, held up at gunpoint and robbed. Kuepker gets "Honorable Mention" SLC? I nearly flipped out. Seriously? She leads the conference in digs per game, accounts for three of the five times ANYONE in the conference goes for 3o digs, earns defensive player of the week more than ANYONE in the conference and friggin' Kelsey Jewasko of UTSA gets libero of the year? Oh, yeah.. and after the conference crowns Jewasko what does she do in her one tournament game: 12 digs (4/game). Kuepker? 33 digs (6.6/game). Have I made my case? Nothing against Ms. Jewakso, but that voting was a joke. Plain and simple.
So, Kuepker is leaving a spot on the floor where arguably she was the best in the conference. That's guts. That's coaching guts. Hey, consider this: Kuepker averaged 3.75 digs per game as a freshman and a translated 5.34 digs per game as a sophomore (recall, we gotta adjust for playing to 25 now). Figgers averaged 4.1 digs per game as a fish and 5.39 per game as a sophomore. Now, I am not saying Lo would have been the second coming of the libero deity that is Stephanie Figgers. I am simply saying Kuepker's record at libero isn't drastically different than Figgers at this point in her career.
So, is it Schott leaving or Hanlan coming that is the principle component here? Both? Or, is it neither - maybe Lo would move to setter if Schott stays and Hanlan goes elsewhere. Only three people know the answer to that and I'm not going to make a habit of second guessing those three.
Facts are facts: Kuepker led the conference in digs per game and could (should, gosh doggit) have won Libero of the Year. Schott was second in the SLC in assists per game. Replacing all that isn't like flipping a light switch. Then again, consider these words:

"Change is the law of life and those who look only to the past
or present are certain to miss the future. - John F. Kennedy"

In Lo we trust. Kuepker is the future. Fearless prediction: It wouldn't surprise me one bit if someone as smart and savvy as "that girl" thumbs her nose at the '08 voters and brings down the house in '09. And if she does? Her place in SFA volleyball history is pretty much "set".
_
10 Kelsey Owens 5-10 Outside Hitter
_ 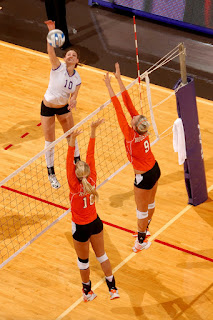 To me, KO is the key.
Middles? Dominant. Should be good to go.
Setters? We've covered that. Kuepker and Buckner give every sign they can shoulder that load. Also, my ears hear and eyes see newbie Gideon getting praise. Check.
Hitters? Someone...maybe TWO someones... have got to step up. Big Time.
Back row will be and has been discussed elsewhere. Its got question marks too but this team needs its hitters to take giant leaps forward if its going to hover atop the SLC standings.
I will tell you right now where my eyes will go in the boxscores during the first few games of the season before I can witness things first hand in Johnson Coliseum: Row: Owens. Column: Hitting Percentage.
Owens' career hitting percentage is .160. She hit .190 last year. The conference as a whole hit .192 last year.
If someone asked me to make a list of what this club has to do to make sure it goes farther than one game in the SLC Tourney, then the first thing on my list is "Owens has to bring it. Night in. Night out." If Owens breaks out and starts throwing down on people, then look out - this team is going to be good. Really good. If KO hits .190 again? Meh.
If you've been halfway paying attention, then you know this team has no senior OH's. So, here's your default leader at outside hitter. Will Owens lead this team in attacks? If you had to guess right now, she'd be your choice, right? It's not unreasonable for a leading attacker on a club at this level to swing 1000+ times. Owens' had 559 attacks last year. It looks as though she's in for a lot more ice on that shoulder after matches.
The Kuepker switch can go fine. Hanlan can pull a Jewakso. Bottles and Bailey will see your attack and raise you a solo block and still, if Owens is so-so it ain't gonna matter much. She's going to have to lead.
I know we are focused on 2009, but since I believe Owens is the #1 key, consider this: Suppose Owens (and Williams-Roberts) really step up this year. Suppose Kuepker is honky-dorry at setter and Hanlan is really a wonderkid. Imagine 2010. Despite losing Bailey wouldn't this team be really set up for 2010? Bottles. Owens. Kuepker. Williams-Roberts. Hanlan. If that's most of the core now and they are good, then doesn't it stand to reason that they'd be great in 2010? That's without even mentioning Daron/Miksch and the fact that one or more of the other freshman from this class may contribute in a meaningful way. I know I am getting the cart ahead of the horse, but my point is: However good we are in 2009 - and we could be really good - I think we'll be even better in 2010.
I like KO. I really do. She's the one player I've got my fingers crossed tightest on. I really, really want to see her become one of the top outside hitters in the conference. Start the count to 1000 now. Let's find out. 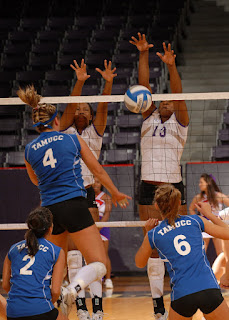 You see that picture over there? That's Kasey McBrearty of A&M Corpus Christi in 'fail' mode. Return to sender with love from Ari and Bay.

I really hope one of my most common phrases from the mic this year is "Blocked by Daron and Whomever" I won't actually say "Whomever", I'll say whomever actually got the block assist.. oh, you get it...
Depth is good. This team needs players like Daron. If she's your third best MB, then you are really, really deep in the middle. I know its early in the practice season, but I've watched a couple of afternoon sessions in the past week and Daron is one of the players that most impresses me. She's Middle Blocker gravy. I think we all know Bailey and Bottles are the main dish.
Man, how scary are the middles on this team if Daron contributes significantly? In a couple of drills in practice last week, Humphreys had Daron and freshman Sabrina Burns working with the outsides taking four-sets against one blocker. Daron's really athletic and if she becomes versatile, then obviously that gives the coaching staff more options on how to integrate her into schemes. I am really curious to see how she gets used this year and she's one of the players I am most anxious to ask Humphreys about. Like Sophomore Melissa Miksch, she may not go into the year asked to shoulder a major load, but if those two push the players ahead of them on the depth chart a little, then that's all the better.
.
Once during practice, I heard Humphreys yell out "If you can find that one thing you do really well, then do it over and over and make it your way to contribute." It may have been just coincidence, but she was facing directly toward Daron and Miksch standing side-by-side in line. It was almost as if Humphreys was affirming the importance of role players - and who knows what might happen in the course of a season - roles change.
.
Despite getting in just 42 sets last year, Daron virtually tied Shelly Swendig for third on the team in blocks per set. That's a good sign - when she was in there, generally speaking, she was blocking well. All signs point to improvement. Depth is good.
Posted by Greg Miller at 9:58:00 PM
Labels: Arielle Daron, Kelsey Owens, Laurel Kuepker
Newer Post Older Post Home