This is the last in a series of three posts focusing on the returning Ladyjacks to this year's squad. The start of the season is fast approaching as the team heads for DeKalb, Illinois this time next week. It will be a semi-homecoming for three of the 'Jacks as Kuepker, Buckner and Franklin all call home within 130 miles of DeKalb - albeit in three different states.

Next on tap here at the blog will be interviews with our freshmen and comments on the recently released Southland Conference preseason polls (we are picked fourth or fifth depending on how you count). Also, since most of us won't be able to root on the Ladyjacks up North, we'll do the next best thing and scout an opponent: Make sure and join me next Saturday night, August 29 at 7:00 as I'll be in Huntsville to blog while watching Sam Houston take on our first home opponent, Louisiana-Lafayette. Our girls will be flying back to Texas at that point, so we'll be able to discuss our first four matches pre-game in Huntsville. Now, without delay... capsules on the three veterans beginning their second year in purple. 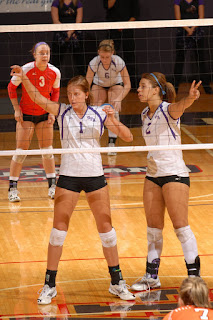 Well, that didn't take long now did it?

I gotta admit something, here. I study more now than ever before. Volleyball, I mean. See, I'm writing this super-duper terrific blow your mind blog now [insert a wink and two thumbs up here] So, I uh....need to know stuff better than ever before.

Last year, the first time I actually SAW the new freshmen was about an hour-and-a-half before the home opener. Oh, I read about them and knew all the basic facts, but I hadn't watched them practice or sat and talked with coaches the way I have this year. Of course, last year the freshmen had to wait far too long to play in front of the home crowd because of a little problem called Ike. So, imagine my surprise when we finally get in Johnson Coliseum and Bottles hits .647 with only one error and blocks eight balls in her first ever home match.

I can still remember glancing down at Ben Rikard (SFA's Volleyball SID) during the match. He easily anticipated my about-to-be comment about Bottles play and without a word out of my mouth he says "Yeah, she's that good."

Here's the scary thing: She's going to get better. Bottles just toys with people when running the slide. She's just murder on that type of attack. At times, virtually unstoppable. Defensively, she just always seems to get to her spot.

Do you see just a wee bit of history here? Can Bottles leave SFA in 2011 with her place in SFA Volleyball lore equal to those three? Probably so...and then some. If she manages good health during her three remaining years in the program, most folks close to SFA Volleyball would tell you she just might eclipse them all.

You know what's amazing? Watching the team - you just KNOW Bottles is a leader. It's very clear. She has the respect of everyone else involved. Rock Steady. To me, she is the most likely player we have on any given night to just come out and take over. There are going to be nights this year in the Coliseum where Bottles just lights people up. The match high for kills last year in the conference was 24. I am on record right now for saying MC puts up 25+ at least once this season.

Last week, I wrote that our other starting middle blocker, senior Ashley Bailey, has Conference MVP potential. The same is clearly true about Bottles. It's especially true when you consider she's got three shots at it. I'm sure she'd trade it for three SLC championships and eating Chipotle at the NCAA Tourney a few times, but any prestigious individual accolade MC garners during her career should surprise no one.

Just sit back and enjoy the ride. Rhodes, Burton, Rohde, Bottles. Sounds good to me. 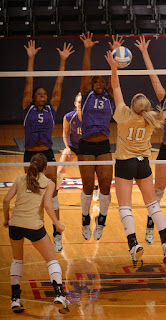 The list of veteran outside hitters on this team: Owens, Williams-Roberts, Miksch. Owens was profiled last week and she is as crucial a player as any to just how far the team goes in '09. Mel is previewed below. Amber got in about half of the actual games the club played last year (55) and swung .157 with 90 kills. All of those numbers should go up in 2009.

The 'Jacks outside hitters killed 872 balls last year. 64% of those kills belong to folks no longer wearing a jersey. It is no secret that the team has a big task in filling the spots vacated by '08 seniors Lauren Railey and Shelly Swendig. KO will take one of the OH spots, but the others are a little less clear.

That being said, Williams-Roberts becoming more of a go-to option on the outside would really be a nice complement to the attacks provided by Bailey, Bottles and Owens. Think of it this way: In football, if you have a pair of wideouts, a tight end, and a running back that can all catch the ball at various depths on the field, then what does that do? It opens the offense up. The quarterback has multiple targets and he can pick and choose how to slice up the defense.

Same thing, here. Bottles and Bailey are going to catch no one off guard. Everyone we play knows that they will get their sets. But see... Owens and Williams-Roberts could really open things up. Kuepker is smart. Buckner, too. If they get good passes and can just put two hands above their heads and start picking and choosing which slots at the net to put the ball in - and we get consistent success from the middles and the outsides...well, hello San Antonio - we'll have a side of guacamole with that top seed.

My point is: Williams-Roberts improving creates options. Options prevent defenses from keying on our middles.

A possible lineup card (granted, brought to you by sfavolleyblog.net, not Debbie Humphreys..and remember.. I'm 484 victories behind):

See what I mean? In the end, you just need to find one of those that really works and you hope more than one does in case of the unforeseen. Watch for these various combinations and others during the tournaments. Humphreys will more than likely get a good long look at as many different rotation possibilities as she can to settle on optimal places for everyone come conference time.

But when you think about who the seven girls will be that start out on the floor, its easy to envision that Williams-Roberts name would be in there. She doesn't have to be in the top three on the club in kills, she just needs to step up and handle more rotations. She, along with KO, needs to be a viable option so that we have a true outside presence to complement our dominance in the middle.

I will add this: My only mildly trained eyes tell me that Williams-Roberts is indeed improved. She has looked really good in a few of the practices I've seen. Plus, one thing I just love about her - she is always smiling. Not goofing off...just keeping it light while working really hard. I admire that.

She will be an integral part of SFA Volleyball's success before she's done here. Right now? Maybe so. She's a good sleeper pick. 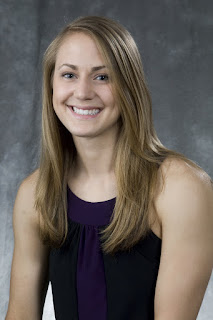 OK, so I was over at Popeye's sucking down some chicken the other day and they've got all this crazy writing all over the wall. One of the phases written there in this fine establishment was "A little a 'dis...a little a 'dat".

A little of this. A little of that. That's Miksch. She provides depth on the outside. Humphreys raves about her improvement. Hey, she's really a good passer which makes her a more than adequate option for rotations where she can play on the back row. Oh, yeah.. that serve. Pretty darn nifty.

Everyone knows I'm a baseball guy.. and when I think of Mel, I think of utility players in baseball. You know what? Those are the kind of players that coaches love. You know at a minimum that she is going to get short bursts of court time to provide stabilization in one role or another. A little sluggish on back row tonight? "Oh, Mel... check in please." Need a big serve to gain some momentum... "Psst. Miss Miksch to the scorer's table....Miss Miksch to the scorer's table". She gets a hot hand on a few attacks? Let her roll.

If you have one thing you do, and you go cold on your one thing any given night, then what? You might as well sit your fanny on the pine. But see, that's not Miksch. She's not going to lead the team in kills or digs - although, she'll keep her share from bouncing off the floor. But, she is going to be an option for a spark.

You're loony in the head if you think these type players can't make a difference in a match. I hate to keep bringin' this game up, but last year against Lamar, Genevieve Gladle drops in two consecutive aces forcing a timeout from our side. Lamar goes on to put up four aces in that first and ugly set. We kicked their tail the next two sets, but we know how it ended. Those aces in that first set made a significant difference and without the momentum they provided, we might have very well wiped them back to the refineries 3-0.

Miksch isn't a big hitter or flashy blocker. She's not 6-3 and she's not overly vocal. She's a solid, sound volleyball player. She's got a little of this and a little of that. She was 5th on the team with 1.62 digs per game last year. I mentioned it when previewing Daron last week and it's worth saying again. Depth is good. Miksch fits in on this team in so many ways.

A good heist has to have the main burglars and a few lurking conspirators to pull everything off. Let's let MC, Lo, KO and crew be the criminals. Mel will do just fine being an accomplice to the crime.
Posted by Greg Miller at 9:37:00 PM