Pannone and Jackson: More Than Just Getting By

Attrition. Survival. Falling By the Wayside. Look to your left, look to your Right. One won't be here.

The freshman year in college -- it's not an easy stage in one's life. In all honesty, finishing my first year in college was one of the most joyous moments of my life. I remember all the detail...the release from all the stress: the last final, packing up all my junk, jumping for joy down the hall of my dorm scraping my hands on the ceiling causing my knuckles to bleed. Not caring that my hands were swelling around the steering wheel driving home at excessive speed. Seeing the decorations at my home when I came through the door. I had made it. I had survived.

Fact #1: All freshman DO NOT make it. 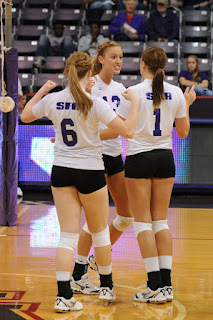 It's true on many levels - and its true of freshman NCAA athletes as well. For a variety of reasons, only two of the five first year players we welcomed to the pleasures of SFA Volleyball in 2010 are still with us. But these two are more than just "getting by". They are more than just surviving. These two are in line to play a major role for the club in 2011 and beyond. Sophomores Monica Pannone and Leslie Jackson lead off this years' series of veteran previews and a transcript of our online chat follows below.

But before we get to the Q & A, here are some personal observations. One thing that makes me chuckle when I watch Pannone is that when she wants the ball - she claps. I did the same thing when I played basketball when I was younger. It's a subconscious thing. My Dad used to ask me why I did that, and I didn't have an answer... I didn't even really know I was doing it. Somehow that little tendency made me identify with Pannone.

I think by the time she's all said and done at SFA, Monica is going to be a blog favorite here. I'm coming around on her. Last year, in preseason interviews with Debbie Humphreys, I kept hearing about this defensive whiz we were bringing in. But, then in practices before the season started, I couldn't figure it out. Pannone seemed blown away by the adjustment to college volleyball - at least to me she did. Her talent was evident, but she couldn't consistently shine. 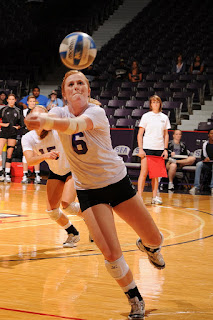 She looks more confident to me and the defense that coaches raved about and was occasionally flashed in matches last year has been evident in 2011 practices so far (at least the one's I've seen). Girl can dig. Plain and simple. Plus, it's natural talent - you can tell. She's not always "textbook' in her footwork and how she takes her arms to the ball, but her reactions are stellar. I've seen her make some crazy ups here and there. The defense is in there.

One thing I wonder when I watch her play is: How much can the coaching staff ooze out of her? All players need a little work on the potters' wheel, but Pannone is someone who you watch and realize CAN be great. She has to be teachable and she has to practice what she's taught - maybe even change a bit in order to be great. But, the thing I see in her is... she CAN. It's not unrealistic that over the next three years she can blossom into a great, great player. I'm a sucker for back-row defense. It's probably my favorite part of the game. Pannone can play half way around - no doubt. I'll enjoy seeing if she gets her game to 6-rotation collegiate level.

Les Jackson: Ms. I'll Fly Under the Radar, Please. Wow. Didn't see this big of a role for her in 2011 coming at the start of last season. I watched her practice and play early on in 2010 just like all the others. I just underestimated her.

Mature. Poised. Humphreys calls her a leader. Today, near the end of practice, the entire team was in a big circle and she was the one talking. I think we've found ourselves something here. Jackson can hit from the right side as well as slide into the middle. In fact, Debbie had her changed on the roster to be listed at "MB". She's in line for a lot of court time - at least early on. If her leadership skills and play at the net step up, then she may become a staple in the lineup all the way through the 2011 campaign. 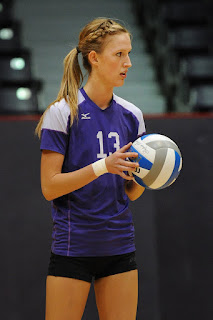 Random fact: During the Spring, the team ran obstacle courses as a training exercise and a way to do something different. Assistant Coach John Critzer asked me who I thought did the best during these sessions and the obvious correct answer was Mel Miksch. However, right after her, John was quick to point out the athletic ability shown by Jackson.

She's increasing her strength for someone so slight in build and she fits the bill of workhorse. She's not a powerful attacker and how many kills she can actually amass is an issue. But, coaches love players like her. My question: Can she fill up the stat sheet? This team doesn't have enough superstars for Jackson to just be a coaches' favorite in word only. Having all the intangibles is one thing. Putting up numbers is another. A sign that the numbers will be there? Did you know she was third on the team in blocks per set as a freshman? (Behind the incomparable Bottles and the 6'3" tower that is Sabrina Burns)

On with the interview:

SFAVolleyBlog: Les, coaches and teammates rave about your athleticism and work ethic. Who is most responsible for creating that work ethic in you as an athlete? Are there any coaches or other people in your past that you think were particularly important in your development?

Les Jackson: That's sweet of them all to say. There are so many phenomenal coaches I have had throughout my life. From YMCA, Howard Middle School, Summit High School, Legacy High School, Strength and Conditioning, TAV, and SFA, it is impossible to name them all. I carry a little bit of knowledge with me from each coach I've had throughout my life. Every time I step on the floor, in the weight room, and when I'm out with friends, whether it be a mental, physical, or life aspect, I have learned so many things from so many amazing people. One person I would have to thank above all is my Daddy. He has been my biggest supporter throughout my entire life. He compliments me when I've played well, and gives out the criticism when I've played bad. He taught me to always give it my all no matter what I'm doing. He planted a competitive seed in my head when I was a little girl, and it has only grown bigger ever since.

SFAVolleyBlog: Monica, on the subject of family, I remember meeting your parents in Houston last year while we were all at Rice and I often saw your sister at matches. Describe the importance of family support on you as an athlete.

Monica Pannone: Family support means the world to me. I honestly could not have done it without them. They come to every game that they possibly can and tell me I played great even on the days that I clearly didn't!

SFAVolleyBlog: Having gone through it for the first time last year, what’s the number one piece of advice you could each give the first year players as they go through Fall workouts?

Monica: I would tell them to make sure that they take care of their bodies!

Les: Expect to come in everyday willing to work as hard as you possibly can. There are gonna be many times your body is going to tell you you've got nothing left, but I promise you will make it through and only come out stronger than you were before.

SFAVolleyBlog: With your rookie year done, and so many new players coming in for 2011, tell me one way that you and the other veterans can make the transition easier for the freshman and other newbies? Do you guys have any “team bonding” plans for the Fall in order to build relationships?

Monica: We plan to be very welcoming and positive. We do team bonding pretty much on the weekends. For Summer II, a lot of us stayed in the same house and really got to know each other.

SFAVolleyBlog: Les, if you had to make a pick, what’s a bigger thrill… thundering down a kill on offense or rejecting an opponent attack at the net?

Les: I would say rejecting an opponents attack at the net HANDS DOWN. Nothing gets me more excited then a big block to end the rally. It's an alarming way to tell the person on the other side of the net their not getting through you and your pin blocker. If you don't think it was a big deal, the wild yelling and screaming that comes after will be evidence enough.

SFAVolleyBlog: Les, what changes do you sense will take place in 2011? How do you project the team in 2011 will be different than the team from 2010?

Les: Practices seem so much more competitive. We yell and scream at each other during competition no matter what. Even if we're lying about a call, nothing is gonna stop the drive to keep the point. It also seems like we've all bonded better. I love each one of my teammates and would do anything for any of them.

SFAVolleyBlog: Monica, you were used a lot to help out with back row defense during your freshman season. What is the number one thing that is different (or harder) about defending on the back row in college as opposed to defending in high school/club ball?

Monica: The fact that all hitters in college are smart and really know how to place the ball in the perfect spot.

SFAVolleyBlog: Monica, while talking with Coach Humphreys before the 2010 season began, she believed you had the chance to develop into a consistent six-rotation player during your time at SFA. What is one thing that you feel like you have to improve on in order to become that six-rotation presence?

Monica: In order to become a six rotation player, I think I need to really work on freezing my platform when I pass the ball and just remember to talk on every play.

A special thanks to both Monica and Les for returning all my questions. It is clear that these two more than just "got by" during their first year in purple. It's nice to know they have THREE years remaining with us. They each should pay dividends this year as well as in 2012 and 2013.

After a brief look at the conference as a whole later in the week, we'll continue these veteran previews shifting to Seniors Melissa Miksch and MC Bottles.