The first time I ever saw Bottles play volleyball was Opening Night 2008. Hurricane Ike had hit and backed up our home opener all the way to mid-September. I wasn't writing this blog then and I so I didn't attend fall practices in that year like I have the last two seasons. I had the list of new freshman memorized: Amber Williams-Roberts, Sydney Ellis, Melissa Miksch and Mary Caitlin Bottles. I had seen pictures of all of them and thought I had their faces memorized, or at least - the best I could from just one preseason mug shot. But, when I walked into the gym on that first night I got confused. Miksch and Ellis were the only blondes in my pictures. There were three girls with blonde hair on the court I had never seen before. The mug shots had let me down as I couldn't separate out the faces from memory.

Ben Rikard steered me right. "That's Bottles over there", he said pointing. "Oh, and don't announce her as Mary Caitlin". She had dyed her hair blonde and preferred to go by her initials. I'd see the color transformation a few times again during the following years. I was actually pleased by the name preference because it gave me a chance to just change the forceful "J-J- Jones" that I used during announcing lineups to "M-C- Bottles". All hail initials! They are great for announcing.
I bring a typed sheet with information on both our players and the opposition to each match. It lists position, height, classification and uniform number before names. It is in 16-point font and arranged numerically so that I can quickly find names to go along with numbers while calling the game and it helps keep me on point while barking the starting lineups. The only night that sheet ever said "MB 6-0 FR 1 Mary Caitlin Bottles" was that very first match.
Granted, this season hasn't gone to form. But when it does end and all thoughts turn to 2011, there will be a conversation among people that matter that goes something like this: "So, what do you think we should think about in terms of personnel for 2011?" Another of those that matter will answer: "OK, let's see, we've got MC in the middle and....."
See, it all starts with Bottles. Wanna know what you're gonna get?
2008: 2.60 kills/set, o.88 blocks/set, .356 attack %
2009: 2.62 kills/set, 1.00 blocks/set, .286 attack %
2010: 2.98 kills/set, 0.95 blocks/set, .271 attack %
Career to date: 2.73 kills/set, 0.95 blocks/set, .297 attack %
Consistent. Solid. Night In. Night Out.
So, while they each have their differences, let the comparisons begin - if they haven't already. Traci Rohde. Brittany Burton. MC Bottles. Does she belong in that company? I say definitely.
Here is roughly - health willing - what Bottles is on pace for:
1280-1320 total kills - that would place her 6th or 7th all time at SFA. Right at Rohde and just shy of Burton.
She is currently 8th all-time in attack percentage at SFA - above Burton and just one slot below Rohde.
Around 450 total blocks. Rohde is first all-time with 483 and Burton is second with 463.
About a block per set. Among people with more than 300 sets played, Bottles is currently 6th all-time at SFA.
What is it likely to all mean - at least, statistically, when she finishes making her mark? Maybe the best way to sum it up is that she may very well rank as one of the top five middle blockers to ever play at SFA.
Bottles is a Facebook hound. Along with Lo, she was the the first player to "find" the blog when it went live during late summer 2009. I knew I needed a Facebook and Twitter presence to help drive traffic here. It worked. Bottles was probably the first person to ever load this page other than myself.
Between her phone and my knack for using too many computers, our Facebook chat that you'll read below got lost in the shuffle a few times. No matter. That's just given us all more time to learn about what really matters: That "1" she wears on her jersey signifies her appropriate status as our "ace".
Read on to figure out why IHOP will never be the official pancake of Ladyjack Volleyball. Which is too bad 'cause you know a "pancake" is when you stretch your hand out on the floor to keep the ball from hitting... ohh.. never mind.. just read on...
SFAVolleyBlog.net: Around the court, basically everyone calls you “MC”. How far back does that go and do friends outside of volleyball tend to use that shortening of your name, too? 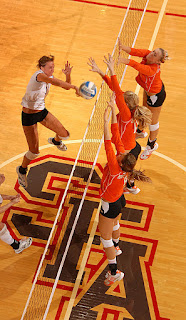 MC: When I first started playing sports my coaches quickly realized that "Mary Caitlin" was much too long to yell at a kid. So my first basketball coach and good family friend Dave Thomas gave me the name “MC”. None of my friends or family started to call me that until high school and since then it’s what most people call me. The only people who still call me Mary Caitlin are my family and a few friends from church back at home.

SFAVolleyBlog.net: There has been little doubt about your effectiveness when running a slide over the past two years. Is that your favorite play to run or are there others that are preferred in your mind. I ask Allison if there were little “likes” and “dislikes” that her attackers have in how balls are set. What about that issue from the attacking perspective?
MC: The slide is definitely my favorite play set to run! As an attacker there are different likes and dislikes for each of us. Some players do better with tempo or faster sets while some prefer a slower tempo. Also some players like their sets to be more inside so that they can hit a sharper angle or pushed farther outside to swing down the line or cross court. It also depends on the team that you play and if you want to challenge their outside blocker or middle blocker. Whenever there is a new setter you always have to communicate about the set and what you prefer. For example, Sabrina and I hit a much different type of “A” set because she reaches much higher than I so Allison and Lo have to set her higher than they would set me. It takes a lot of communication at the beginning but once everyone gets used to each other than there is less communication between the setters and hitters.
SFAVolleyBlog.net: With Ashley Bailey gone, you are the primary middle blocker and will be again next year. Give us a breakdown of each of the other middles and what you think they bring to the club.
MC: Sabrina is one of the most coachable players I have ever played with. Whatever the coaches ask of her she will immediately do it. She is one of those players who would practice for five hours a day if you allowed her to! Lindsay is full of energy. As a player - no matter how she is doing - she always has constant energy and that’s huge to be able to bring that on the court every single day. Carrie is someone who is always pushing you to be a better player. She’s a workhorse and never slacks off during practice or a game.
SFAVolleyBlog.net: Even though just a junior, you are certainly looked at as one of the leaders on this team. Do you embrace the “leader” tag or is that something that comes less naturally than blocking and hitting volleyballs?
MC: Being a leader definitely comes less naturally to me than playing. I have always been the kind of player who leads by example, but this year I have become more vocal. As an upperclassman my leadership role is to be more of a vocal leader this year. But, then again I have never had a problem saying what is on my mind so that has helped me step into that vocal/upperclassman role.
SFAVolleyBlog.net: Finally, often on social media sites like Facebook, you’re known to express your desire for Chipotle and/or Waffle House. The team often hits local Chipotle’s when on the road, etc…and I totally get it. But, enlighten us on Waffle House a bit. The only ones I have ever been in have been well…shall we say…suspect in terms of passing health inspections. Are there other eatery favorites on the road for either you personally or the team as a whole?
MC: As a team I think we love Texas Roadhouse and On the Border the most. We also like Cracker Barrel and since coach loves Cracker Barrel we eat there all the time! But Waffle House is breakfast food and the only person I have met who doesn’t like breakfast food not at breakfast is Maddie! I think Waffle House is amazing. In Dallas they are all pretty clean so I have no problem with them! In my opinion, Waffle House beats IHOP any day!
------------------------------------------------------------------------------------------------------
Thanks to all those who have been commenting here at the blog and sending me emails. I appreciate all of the questions, opinions and pats on the back as well as constructive criticism to make the site better. I think this a good opportunity to especially thank the coaches and parents from Sam Houston and Lamar who are regular readers. I was shocked earlier this season when various parents recognized me at road games and came up to introduce themselves and talk volleyball. It's always a pleasure to meet other fans that are just as passionate about this sport as I am.
The 'Jacks head down to Corpus Christi and then over to San Antonio at the end of the week. Make plans to be at our last two home matches against McNeese and Lamar. Be especially sure to get there early and stay late on Saturday the 13th as we honor our three seniors: Laurel Kuepker, Ari Daron and Kelsey Owens.
KO is the only returner this year who has not had a profile, and we'll fix that in the next two weeks. I still intend to do something with the freshmen, but I think I'll wait and get their thoughts on their first year experience when we are all said and done.
See you in Johnson Coliseum next week!
Posted by Greg Miller at 8:09:00 PM
Labels: MC Bottles
Newer Post Older Post Home