For audio of the entire interview with Payton Cerny click here.

If you were asked what the biggest difference is between the status of SFA Volleyball at the end of the 2019 season and now you'd be forced to answer "COVID".  Because, well, COVID is at the root of just about all societal changes between life as we used to know it in Fall 2019 and the present.  But the second biggest difference might very well be the emergence of sophomore right-side hitter Payton Cerny.

As of this interview, Cerny leads the 'Jacks in kills and kills per set across the entire 2020-2021 season.  Her dominant presence on the right side has been unrelenting with the coming out party happening back in the fall just a few days after I tested positive for the 'rona.  The weekend containing September 12, 2020 ended my 20-year streak of home match attendance.  I read the box score and did a double-take when I got to Cerny's line against HBU:  21 kills.  TWENTY-ONE.  My goodness. What had I missed?  Well, now I know.  We all do.  A new weapon in the SFA offensive arsenal had been revealed.  And what a cannon it is. 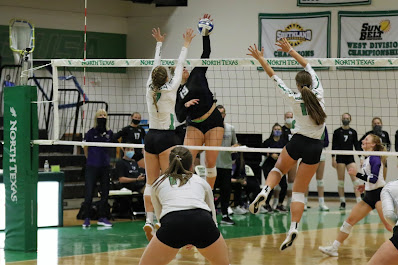 About a week ago, I strolled into an afternoon practice in which the club had both nets set up for positional drills.  The attackers were stationed at one end of the gym on large blocks and were being tossed balls in order to work on hitting mechanics. One by one each of the pin hitters and middles came to stand on the blocks and got about a dozen swings in before rotating off.  Assistant coaches Alisa Blair and Sarah Carthel would occasionally pause and give feedback among the tosses.  Some of the swings looked natural and others looked awkward given the athletes' feet were pretty much stationary.  The focus here wasn't on approach, but rather simulating the swing at the apex of the jump.  I watched a while and then my attention waned and I focused on the drills going on over on "court 2" for a bit.

But, then... BOOM.  BOOM.  BOOM.  Something had changed.  Cerny was up on the block for her turn to take some swings.  Laser beam shots to the floor over and over and over.  The force coming off her flat-footed swings was close to twice what I had witnessed from the mere mortals that had attempted the drill before her.  Payton Cerny is strong.  As she remarks at one point in the interview linked here... her hitting is considered her primary forte.  That's a good thing because I wouldn't want to try to stand in the way of those frozen ropes she was dolloping out from her left hand.

Flash forward to this week and after practice today, I sat down with Payton and we chatted about her formative years in volleyball as well as what she learned from her first year at SFA.  She talked about improvements and things that she feels are still works in progress.  We talked about her place among what is now a very young team.  Of course, chatting while each masked, we stated what we felt COVID had forced us to learn and realize.  She mentioned her biggest mentors coming into this year were Julia Whitehead and former Ladyjack Corin Evans.  That response was not a surprise as you could hardly ask for a better duo to learn from when it comes to passion, commitment, and just overall character.  Finally, Payton rattled off a set of influences:  parents, family, club and high school coaches, strength coaches and friends.  I mentioned that "great things are never done alone" and she nodded in agreement.

Good thing so many people invested in Payton Cerny.  Ladyjack volleyball fans... I think we've got us the next great thing.. and she wears "19". 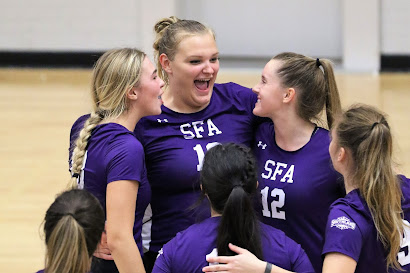 "Shining Purple Lights On:" is a new weekly interview series that will showcase an athlete, coach or team personnel member associated with SFA Volleyball.  It's your chance to learn a little more about a member of the current Ladyjack Volleyball family.