SFA: #1 in Nation in a Serving Category

This post is an investigation into serving statistics during the 2014 regular season for all Southland Conference teams.  We'll look at both the best individual servers as well as team serving in this statistically minded post.

I discovered something amazing.  SFA has the best ratio of service aces to service errors in the nation as of this writing.  I discovered this by pure coincidence.  Here is how all this went down:

I have been thinking about serving efficiency ever since I began teaching the 7-year olds on my city league youth team how to serve.  The games at this age can be won by teams that simply don't error while serving since there are so few rallies.  At about the same time I realized this, I travelled to Natchitoches to cover the UCA/NSU match.  I have long questioned the overall effectiveness of aggressive jump serves when they lead to a lot of errors and that night I watched UCA pound a lot of balls into the net or out of bounds on serves.  So, I got the idea to look at all the servers in the conference and look specifically at their ratio of aces to service errors.

I actually have had this idea before, but never really studied it in depth.  While researching individual service patterns in the conference, I noticed SFA had more aces than errors and I thought this was rare.  The average ace to error ratio in the Southland this year was right at 0.66 (think of this as 2/3). So, for every two aces you see in a Southland contest, those two aces will be countered by three service errors on average.  SFA's ace to error ratio is 1.26.  A little quick statistical work showed that this is over 2.5 standard deviations above average, a value which in bell-shaped data should occur only 1/2 of 1% of the time. Now, there are 334 DI Volleyball programs and 1/2 of 1% of the number 334 is between 1 and 2.  So, it hit me like a ton of bricks last night about midnight. If my calculations were right, then SFA might be in the top two or so in the nation in service ace ratio.

As quick as my fingers could get on the NCAA Volleyball Statistics website, I had found the data I needed to show that, yes.. SFA was FIRST IN THE NATION in the ratio of aces to errors.  In fact, there are only six teams in Division 1 NCAA Volleyball that have more aces than errors.  Here is the list:

There you have it.  SFA has the best ace to error ratio - by quite a hefty margin - in the entire country.  I nearly peed my pants when I figured this out and sent volleyball SID Brian Newton an email about it at 12:40 AM last night.  Like all great SID's, he was still awake and working and we started talking about it in emails.  Fascinating stuff.  But wait, you think that's interesting?  This will blow you away:

Now, what about the top individual servers in the conference this year?

Below, we look at the Top 20 ace producing players in the conference.  There are actually 21 data points since there was a tie for 20th.  To get into the top 20, a player had to amass 25 or more service aces.  All 21 girls are all listed at the bottom of this post for reference.  I plotted these 21 girls aces on the horizontal (x) axis below and their number of service errors on the vertical (y) axis. Check out the plot: 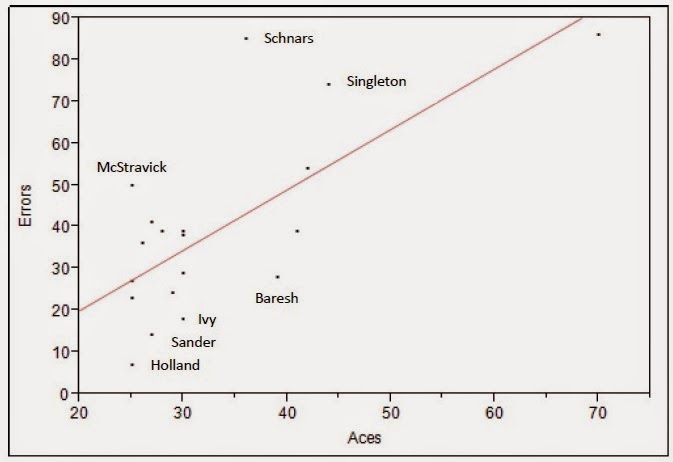 The slope of that trend line going through the data works out to be 1.45, which of course is really close to 1.5.  If you remember your high school geometry, a slope of 1.5 means as you increase aces by 1, you expect to increase errors by 1.5.  Now, multiply each of those numbers by two and what do you get?  For every two aces, you expect to increase service errors by three.  That's a 2/3 ratio.  Have we seen that before? Sure, that's the conference average that I alluded to above.  So, the above graph shows that the top servers in the conference still huddle around the ratio of 2 aces to every three errors.  That alone is rather interesting.

First, those below the trend line:  Holland and Ivy (SFA), Baresh (AMCC) and Sander (UNO).  There are your four most efficient servers in the conference.  They managed to crack the top 20 in aces, but at the same time, they kept their service errors amazingly low so that they fall well below the trend line.  This indicates efficiency:  high aces and low errors.  That's good!

But, what about those way above the trend line:  Schnars and Singleton (UCA) and McStravick (HBU).  These girls have way more service errors than what should be expected for the number of aces they achieved.  Amazing!  It was UCA's serving that got me on this crazy chase in the first place and sure enough, they have two of the three girls with the lowest ace to error ratios among the high ace girls in the whole conference.  See list below.  The fact that these points fall above the trend line represents more serving inefficiency than what should be expected.  That's bad.

By the way, that one lone point WAY over on the right is Southland ace leader Malina Sanchez who has 70 aces and 86 service errors.  Notice her data point is right near the line, so her ratio is right in line with what would be expected.  Another "by the way" fact... McNeese leads the NATION in aces, but is also one of only three schools with more than 300 service errors.  Also, Lamar has one of the worst ace to error ratios in the country (in the worst five).

Now, one might argue that jump servers like Schnars and Singleton get opposing teams out of system often on serves that land in bounds and this has a tangible benefit to their teams not accounted for in the numbers above.  That's fair to assume.  But, three counterpoints:  1) How do you know that isn't true for good servers who don't jump like Holland and Ivy?  2) You don't have any hard data ON THE WHOLE LEAGUE to substantiate that claim anyway (although it would be nice to try and track for the LEAGUE) and 3) one thing is for certain:  a service error results in a 0% chance you win that point.

So, I think the above data suggest that a player who doesn't jump serve, but has something about their approach that leads to high aces and low errors is an overall better contributor to their teams total scoring.  To boil it down, let's just look at two extremes:  What would you prefer:  Holland (25 aces, 7 errors, short serves to get teams rushing in to the net and potentially out of system) or Schnars (36 aces, but 85 errors with a jump serve that can be difficult to return)? It's going to be tough to argue that Schnars' 11 more aces isn't cancelled out by her 78 more service errors!!  Plus, can you really explain away 78 more service errors by saying her jump results in more UCA points that Holland's short float results in SFA points?  I doubt it.  If so, I'll need some data and not just a hunch for me to believe it.

Notice that an aggressive jump server like Devaney Wells-Gibson (she sometimes backs off on it, though) has been able to record more aces than errors (41/39).  So, I am not down on jump serving as a whole.  I just believe the control has to be there.

My conclusion is that aggressive jump serving needs to result in a VERY large fraction of balls staying in play when they are not aces.  Otherwise, the practice is too aggressive and the net effect is negative and the player should consider abandoning it.  I think my data above suggests exactly that.  For now, I nominate Holland, Sander, Ivy and Baresh (in that order) as the most efficient servers in the conference.  Holland's ratio in the list below is just absurd: